How to Convert Time to Decimal in Google Sheets

At times, you may run into a situation where you need to convert time to a decimal number in Google Sheets. Let’s say you want the difference between two-time instances. It might be more intuitive to say that the difference is 3.25 hours rather than to say 3 hours and 15 minutes. This is especially important if you need to use this difference in subsequent calculations, such as total wages based on hours worked and hourly wage.

So how do you do it? There are a couple of methods by which we can achieve this desired result in Google Sheets: using TIME()functions (HOUR(), MINUTE(), and SECOND()) or simple multiplication with TIMEVALUE(). We’ll take a look at both of them in this guide.

A Real Example of Converting Time to Decimal

A construction supervisor has the following rap sheet with working hours for contractors under him during the first half of a given day:

The column D calculates the hours a given contractor has put in for the day. This will be used further in calculating the total wage payable to the contractor for the day. A simple subtraction will not give a result that can be used for further calculation. How to proceed, then?

As you see above, we can now directly calculate the total payout (based on an hourly wage or a daily wage). You play around with the time values and verify if the results get correctly populated. Copy the spreadsheet using the link below:

Amazing! Let’s take a closer look at the components of the function and then move on to a detailed walkthrough of using TIME() and TIMEVALUE() functions to convert time into decimal values.

The Anatomy of the Functions

The first method is to use the TIME() functions (HOUR(), MINUTE(), and SECOND()). We write the HOUR() function (for example) as given below:

Let us look at what each term means:

The MINUTE() and SECOND() functions follow the exact same anatomy, with corresponding output in terms of minutes and seconds, respectively.

Let us look at what each term means:

How to Convert Time to Decimal in Google Sheets: Time Functions 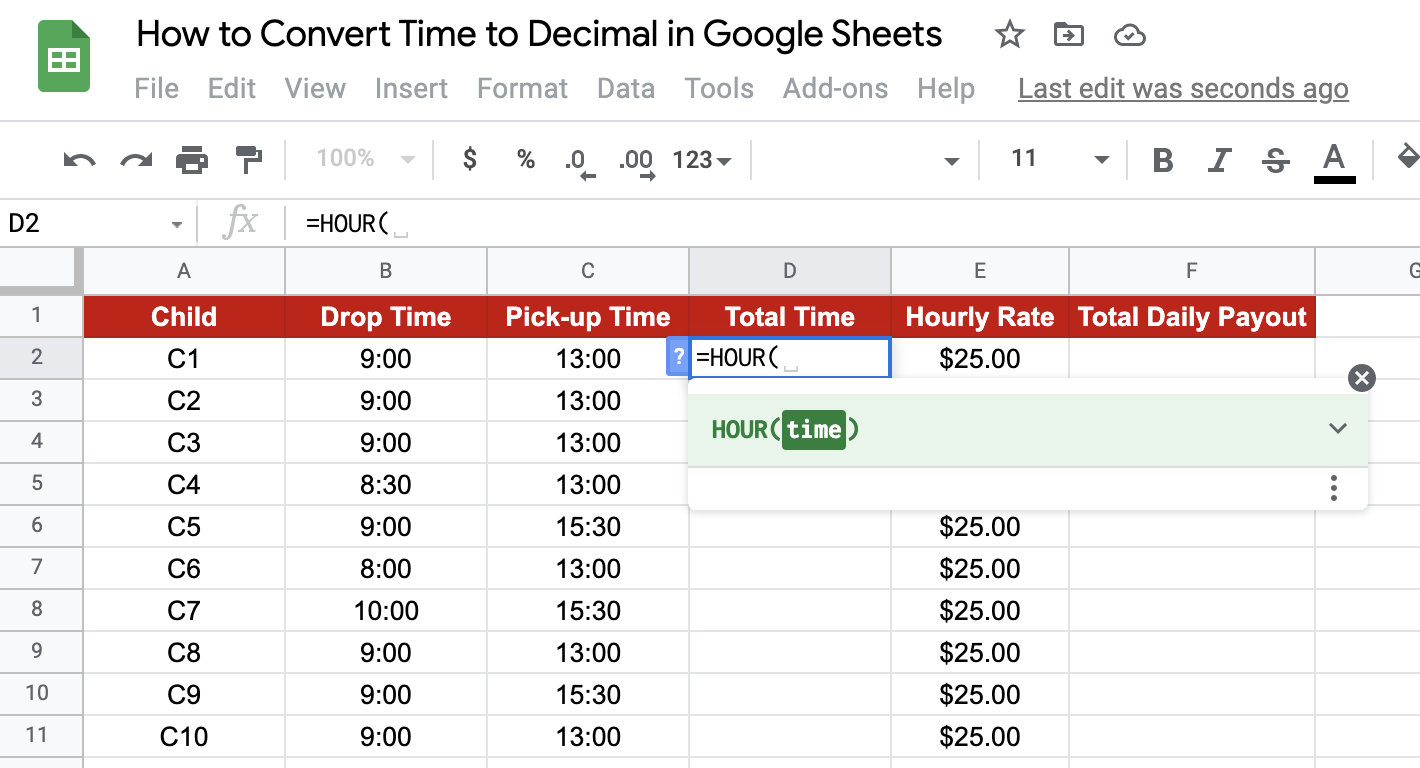 How to Convert Time to Decimal in Google Sheets: Timevalue function

There you go. You are now ready to start with converting time to decimal in Google Sheets. I recommend experimenting with different time values and some of the other Google Sheets formulas available together, to see how the results differ.

How to Use the MMULT Function in Google Sheets

Read More
GGoogle Sheets
The RANK.AVG function in Google Sheets is used to determine the rank of a specific value in a…