You can easily copy a formula down an entire column in Google Sheets to automate your work and save a lot of time.

When using a spreadsheet, you often need to apply a formula to an entire column or row.

If you have a hundred or a thousand cells in a column, you can’t manually apply a function to each cell.

Say you want to do the same mathematical calculation to a long list of numbers. For example, compute the square of many numbers.

Writing the formula in every cell one by one would be too exhausting and takes a lot of time.

Fortunately, there are diverse ways to copy a formula down to an entire column in Google Sheets without manually entering them:

In this guide, I’ll show you how you can use each of these methods.

1. Using the Fill Handle to Copy a Formula Down an Entire Column

The easiest approach to copy a formula down is to use the so-called fill handle.

The fill handle is a feature in Google Sheets that can apply a formula to an entire column. You can manually drag the fill handle if you have a smaller dataset.

Let’s see step-by-step how can we use the fill handle to copy the formula down the entire column.

Look at the picture below to understand this better.

For example, in the fourth row, we would like to compute the square root of A4, but our original function has a reference to this cell A2.

It always shows the correct result of each row, and we didn’t have to type them manually.

Try it out by yourself. You may make a copy of the spreadsheet using the link I have attached below:

Make a copy of example spreadsheet.

2. Double Clicking on the Fill Handle to Copy a Formula Down an Entire Column

You can achieve the same result as above by double-clicking on the fill handle.

It will automatically find the end of the column and fill the column with the same formula until the last filled cell.

This is an even faster way to copy a formula down an entire column. It doesn’t require you to drag down the entire column with your mouse.

But be aware that this method cannot be used in every sheet. While it’s very automatic and saves a lot of time, it also has limitations.

Look at the example below where we have the same formula in the first row as before. The table has an empty cell in the middle of the column.

When we double-clicked on the fill handle, it only copied the formula down until cell B5 because Google Sheets detects it as the last filled row.

If you have empty cells in your column and don’t want to remove or fill them, it’s better to use the drag-down method shown above.

3. Using the ARRAYFORMULA Function to Copy a Formula Down an Entire Column

Another quick and effective method to copy a formula down an entire column in Google Sheets is by using the ARRAYFORMULA function.

The fill handle is suitable for smaller columns. However, if you have a massive table, it might be better to apply the formula with the use of the ARRAYFORMULA function.

We have explained in details how to use ARRAYFORMULA function in Google Sheets in our previous article. Check it out to learn more about its syntax and use cases!

But now let’s see step-by-step how to use it in our previous example to apply the square formula to an entire column. 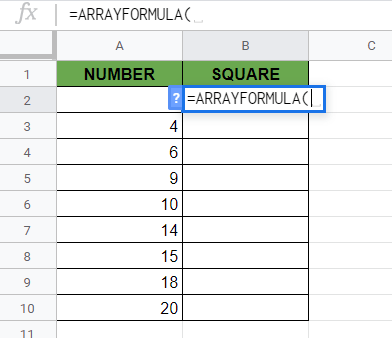 ⚠️ A Few Notes to Use the ARRAYFORMULA Method Even Better:

That’s pretty much it. Now you know how to copy a formula down an entire column together with the various other Google Sheets formulas to create even more powerful formulas that can make your life much easier. 🙂

Our goal this year is to create lots of rich, bite-sized tutorials for Google Sheets users like you. If you liked this one, you'll love what we are working on! Readers receive ✨ early access ✨ to new content. There will be no spam and you can unsubscribe at any time.

How To Calculate Days Between Dates In Google Sheets

How to Use LEN Function in Google Sheets

Read More
GGoogle Sheets
The AVERAGEA function in Google Sheets is used to calculate the numerical average value of a dataset.  AVERAGEA…

Read More
GGoogle Sheets
Learning ways to protect your Google Sheet data is useful, especially when you work in a coworking environment…