How to Use DSTDEV Function in Google Sheets

The DSTDEV function in Google Sheets is useful if you need to calculate the standard deviation of a population based on a sample by using the numbers in a field (column) of records in a list or database that match conditions that you specify.

The DSTDEV function is a built-in function that is categorized as a ‘Database Function’. It can be used as a worksheet function, and can be entered as part of a formula in a cell of a worksheet.

Now, instead of a partial data (population sample), if you are working on full data (population), then there is another function called DSTDEVP that you may use. You can find a comprehensive guide on the same in one of our articles here.

What is a standard deviation?

Let us assume that I have gone to a dog rescue and adoption centre to adopt a “Pug”. The volunteer shows me data of the rescued pugs at their centre, and they have noted down each of their height and weight separately. I want to understand if pugs are generally of the same height for a given age, or if there is variation in how tall they grow up to be. Since I can not collect data for all the pugs in my country or region, I have to work with the limited sample of data collected at the centre.

Here is where the DSTDEV function comes to my aid. The function outputs the standard deviation of the heights for pugs at the adoption centre, which is a sample of the population of pugs in my country. The standard deviation of the heights is around 125.12mm for an average height of 294mm. Since the value is moderately high, I realize that heights for young pugs do vary and are not at the same level, in general.

That’s just one example. There are plenty of other use-cases for this function in real life. Great! Let’s dive right into such real-business use-cases, where we will deal with actual values and as well as learn how we can write our own DSTDEV function in Google Sheets to calculate variances in data.

The Anatomy of the DSTDEV Function

So the syntax (the way we write) of the DSTDEV function is as follows:

Let’s dissect this thing and understand what each of the terms means:

For a better understanding of the difference between estimating variance from a population vs. a sample, we shall be explaining the function using the same examples from our guide on DSTDEVP function, so that you can compare the two.

Take a look at the example below to see how DSTDEV functions are used in Google Sheets.

The above are five of the many purchases Linda made at the grocery store this week. As is evident from the quantities purchased, she went a bit overboard with the third purchase listed down here. She wanted to know if her high-priced purchases were in the same price range as her low-priced purchases.

Just above the captured data, I have given a provision to enter the criteria based on which the data will be filtered. This is not a required criterion, and the function will still function properly if we leave it blank.

The DSTDEV function will give her the desired result based on the conditions specified in A2:D3, as below:

What does the 0.71 value mean here? The two orders which have a unit cost of more than $3 listed here are Order IDs 1 and 5, costing $5 and $6 respectively. The formula gives a standard deviation of 0.5, which means the values ($5 and $6) are not too different from the mean value ($5.5). This indicates that all the purchases Linda made for more than $3 are for about the same value, since the dispersion is not that high.

Why is this value higher compared to the standard deviation obtained from the DSTDEVP function, though?

You may try changing the criteria and see how the result changes. Go ahead and make a copy of the spreadsheet using the link I have attached below:

How to Use DSTDEV Function in Google Sheets

As explained in the previous example, note that the standard deviation is higher here since we are considering the data to be a sample, and not the entire population.

As per the specified criteria, the sales units that qualify to be considered vary from 800 units to 1,500 units with an average value of 1,100 units. The standard deviation obtained denotes that the data points aren’t that close to each other.

How to Compare Two Sheets in Google Sheets

How to Use DGET Function in Google Sheets 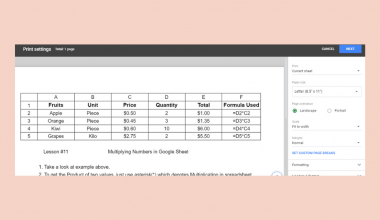 Read More
GGoogle Sheets
The STDEVP function in Google Sheets is useful to calculate the standard deviation across an entire population. It…