How to Get Most Frequent Keywords from Titles in Google Sheets

There are a lot of functionalities that Google Sheets supports, like scraping data from websites, creating semi-automated SEO workflows, manipulating big data sets, automating follow-ups for outreach campaigns, and much more. In this guide, I will introduce you to some of these in-built functions, which enable you to perform one of the most common SEO tasks – to get the most frequent keywords from a given set of titles.

Before I begin, I want you to understand how tracking keyword counts can help on-page SEO (Search Engine Optimization). When used correctly, it can help attract search engines and boost a page’s visibility in the search results. Ignoring this could keep a page from the ranking itself, thereby leading to it not appearing in the top search results. As a content owner, you don’t want to be in that situation.

There are a few different ways to do this, and they involve a combination of in-built functions. I am listing down the most commonly used functions here, some of which I will be using in the examples that follow.

To go through a more comprehensive guide on how to use these functions, feel free to go through some of our articles on the same.

The QUERY() function may be the most powerful of the functions listed above, and when combined with a few other functions, it allows us to effectively manage and manipulate data using the power of SQL. Let us take a look at exactly how, using an example.

Using the IMPORTFEED() function, I selected 25 of the day’s news titles from Google News in ATOM format (an alternative to the RSS web feed). 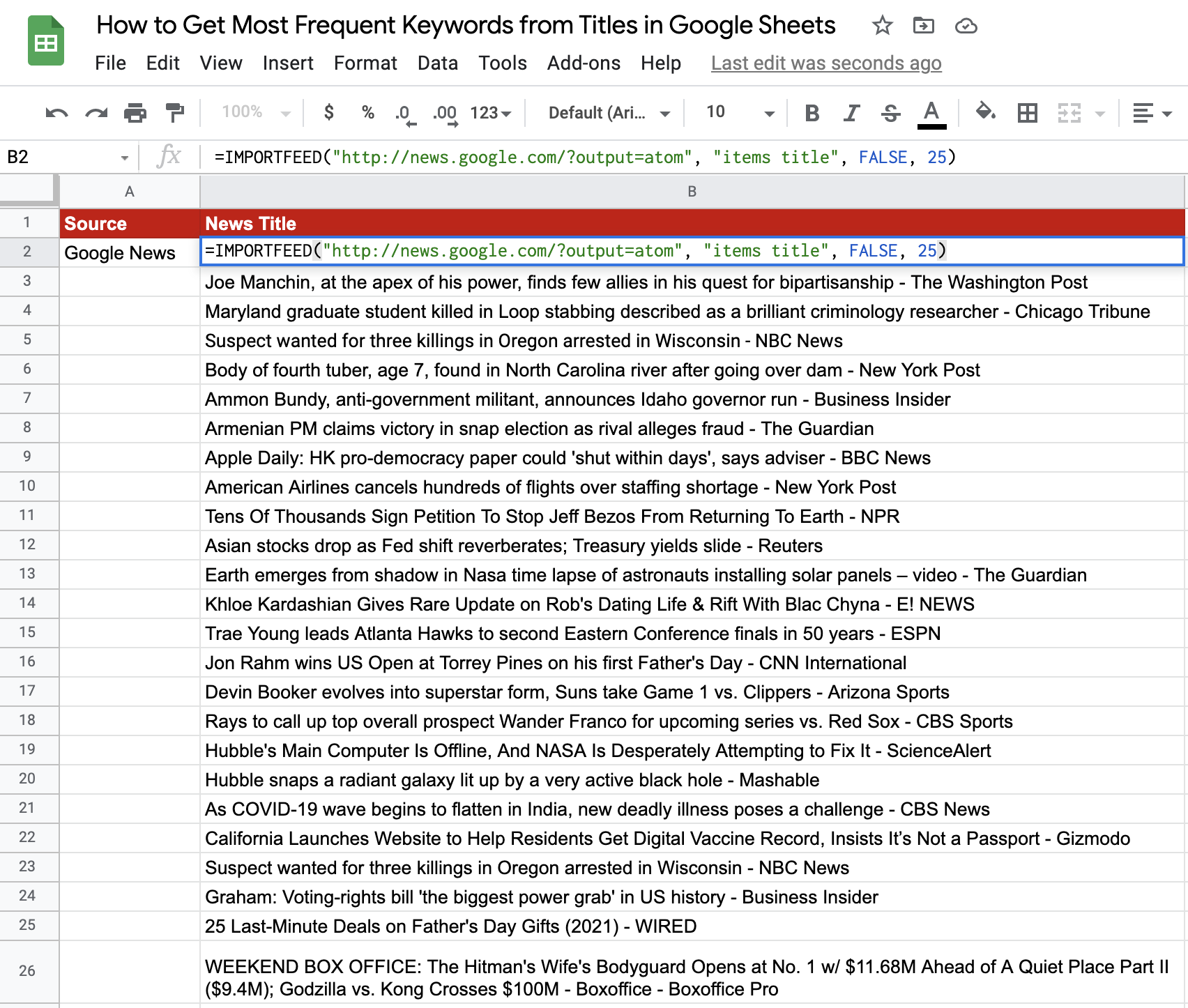 Look at the formula bar for a quick refresher on how to use the IMPORTFEED() function. The first input refers to the source feed from which you want to pull the data from. The second entry, “items title”, describes what you want to pull from the feed, and then at the end, you give the number of entries you want to import. On our website, you can find a detailed article on how to use the IMPORTFEED() function and other common web scraping techniques.

Our goal here is to identify the most frequently occurring keywords in today’s news.I have navigated to cell D2 to insert my formula:

Before I move to the result, let me break down the formula into smaller parts. I will start with the innermost function used here, which is JOIN().

The output, if you have followed the steps correctly, will look like this:

To further refine your result, you can add a few conditions:

If you are more comfortable with common Excel functions than with QUERY(), you can use INDEX() and MATCH() to find the keyword with the most occurrences. The only caveat here is that it will fetch you the one keyword that has more occurrences than every other. And not a group of keywords with corresponding counts like we get using QUERY(). Let us look at an example.

Let’s use the same IMPORTFEED() function to get the titles of articles on Sheetaki.com.

Once you have the titles, proceed to get the list of keywords as in the earlier example. We will use:

to get the list of keywords as entries in a single column (Column C in this case).  Use the UPPER() function in column D to ensure that all keywords are in uppercase, ensuring that the frequency count is error-free::

Refer to our article here for a detailed explanation of how to use the UPPER() function.

Given below is what you get once you run the two functions listed above. Our objective now is to find the keyword that occurs the most number of times across column D.

And we achieve this by using a couple of formulas given below:

Let us break those two down into smaller components:

On applying the two functions, you should get an output as shown below: 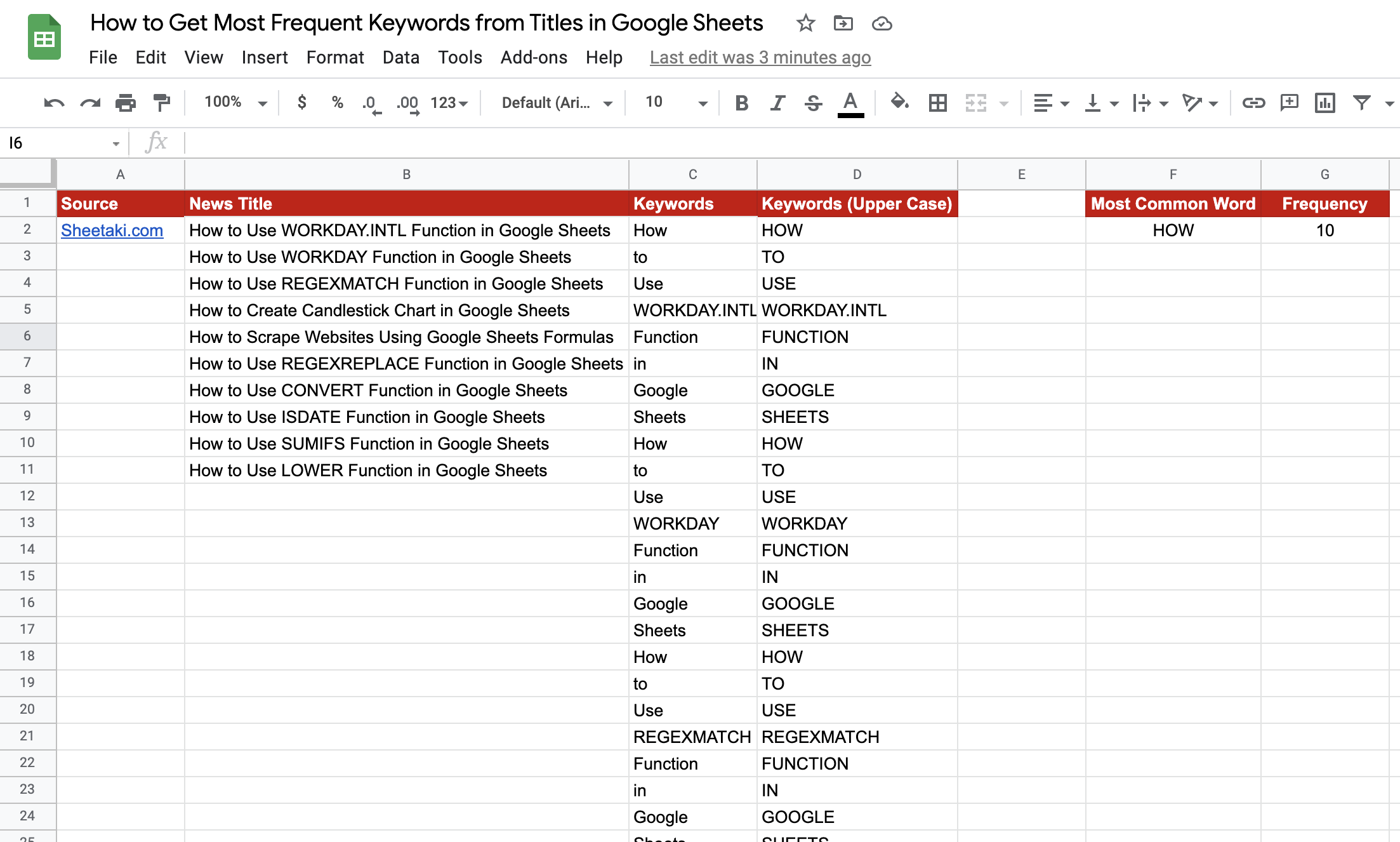 That’s pretty much it. You have everything you need to get started with keyword counts on Google Sheets. You may make a copy of the spreadsheet using the link I have attached below:

I would recommend playing around with the formulas above and other numerous Google Sheets formulas and seeing what you can come up with.

How to Use NETWORKDAYS Function in Google Sheets

How to Subtract a Duration from Duration in Google Sheets

Read More
GGoogle Sheets
Making a bubble chart in Google Sheets is useful for depicting three or four dimensions of data. At…

Read More
GGoogle Sheets
The KURT function in Google Sheets is used for computing the kurtosis of a dataset, which is one…

Read More
GGoogle Sheets
To extract date from timestamp in Google Sheets is useful if you have DateTime values in your sheet,…