How to Calculate P-Values in Google Sheets

You might need to calculate p-values in Google Sheets when you need to find out if there is a statistical difference between two samples.

The p-value measures the probability that an observed test result could have occurred just by random chance or under the null hypothesis.

In this guide, we’ll show you when this type of calculation can be used. But first, let’s understand what the p-value refers to.

The p-value determines whether a hypothesis is true or not. We first define a certain threshold to consider the data as being correlated or not. This constant is known as the significance level. Usually, this is set to 0.05.

If the calculated p-value is below the significance level, then the expected results are considered statistically significant. A lower p-value means that your data is more likely to have a significant difference.

Let’s say you want to know whether there is a statistically significant difference between test scores found in a pre-test and post-test exam. We can use the T.TEST function to find the p-value of this hypothesis.

The function requires four arguments and follows the following syntax:

In the example described above, our two arrays would be the ranges of pre-test scores and post-test scores.

This use case is just one example where p-values might be useful. Let’s learn how to use the T.TEST function ourselves in Google Sheets and later test out the function with an actual dataset.

Using T.TEST to Find the p-value in Google Sheets

Since each pre-test result is paired with a corresponding post-test result, we should use a paired sample t-test. This type of test is useful when comparing the means of two samples, where each observation in a sample has a pair in the other sample.

To get the values in cell D2, we just need to use the following formula:

You can make your own copy of the spreadsheet above using the link attached below.

As another example, let’s say we got two samples out of our pretest scores: x and y. Let’s see if there is a significant difference between their means. 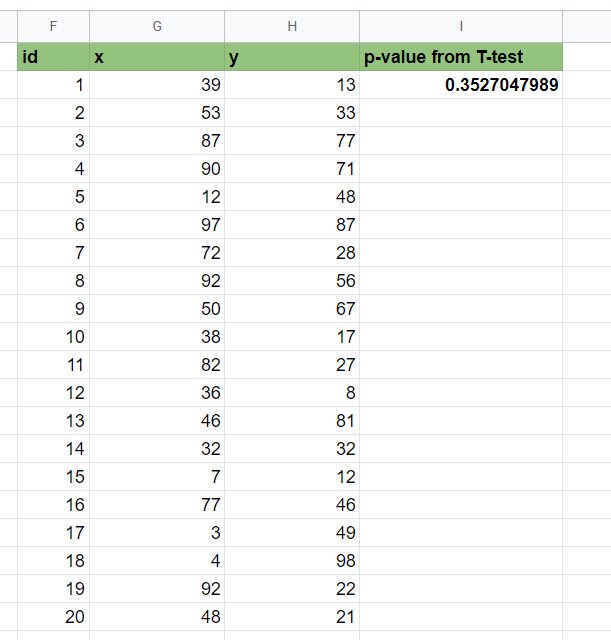 The p-value returned is much higher than our threshold of 0.05, so we can say that there is no significant difference between these two samples. This is expected since their means should more or less be the same if they are both random samples from the same population.

If you’re ready to find the p-value on your own in Google Sheets, let’s proceed with the next section!

How to Use the T.TEST Function to get the P-Value

In this section, we will go through each step needed to start using the T.TEST function to find p-values in Google Sheets. We’ll use the pre-test and post-test exam score dataset found in the prior example.

Follow these steps to start using the T.TEST function:

Using the T.TEST function is the easiest way to calculate p-values in Google Sheets. This step-by-step guide shows how simple it is to set up a t-test to determine whether variables in your dataset have any correlation.

The T.TEST function is just one example of a statistical function in Google Sheets. With so many other Google Sheets functions out there, you can surely find one that will help with your calculations.

Are you ready to learn more about Google Sheets? Make sure to subscribe to our newsletter to be the first to know about the latest guides and tutorials from us.

Our goal this year is to create lots of rich, bite-sized tutorials for Google Sheets users like you. If you liked this one, you'd love what we are working on! Readers receive ✨ early access ✨ to new content.

How to Make a Scatter Plot in Google Sheets

How to Calculate the Confidence Interval in Google Sheets

Read More
GGoogle Sheets
The ISNUMBER function in Google Sheets is used to determine if a value is a number. This function…

Read More
GGoogle Sheets
If you want to have a visual presentation of the chunks of information about your work or project,…

Read More
GGoogle Sheets
The ABS function in Google Sheets returns the absolute value of an integer. It converts negative numbers to…