How to Use Z.TEST Function in Google Sheets

The Z.TEST function in Google Sheets is useful when you want to compare the mean of a sample dataset against the population mean.

Z.Test functions help determine whether there is a relationship between two particular variables.

The rules for using Z.TEST in Google Sheets are as follows:

Let’s look at a quick example.

Say you heard a claim that people who grew up with a library of books in their home have a higher IQ on average. As a curious statistician, you want to prove that there is a relationship between the presence of a library and someone’s IQ.

Let’s assume that it’s already known that the average IQ is 100 and that the standard deviation is about 15. In your research, you were able to have thousands of respondents take an IQ test. An additional questionnaire was then provided to determine how many books they had as a child. With all this data now available,  how do we go about testing out the claim?

The Z.TEST is a quick and reliable way to check if any such relationship exists. We just need to plug in the IQ scores of your sample and test it against the overall population’s average mean IQ of 100. If the value returned is very low (usually ≤ 0.05), then it’s highly likely there is a relationship between IQ and the presence of books.

The output of our Z-test is known as a p-value, or probability value. This metric describes how likely it would be for the result to have happened by random chance. To put it simply, if the Z-test returns a low p-value, then there is a statistically significant relationship between two variables.

We can use the Z.TEST all kinds of data.  For example, we can use the Z.TEST to test the effectiveness of a medical treatment on people of a certain age. Another use case would be to measure the impact of legislation on different sectors of the population. Anytime we’re comparing a sample mean with the population’s we can use a Z-test to see if there is a significant difference.

Now that you know what the Z.TEST function is all about, let’s learn how to write it ourselves in Google Sheets and later use a test dataset to see this function in action.

The Anatomy of the Z.TEST Function

So the syntax (the way we write) the Z.TEST function is as follows:

A Real Example of Using the Z.TEST Function

Take a look at the example below to see how the Z.TEST function is used in Google Sheets. 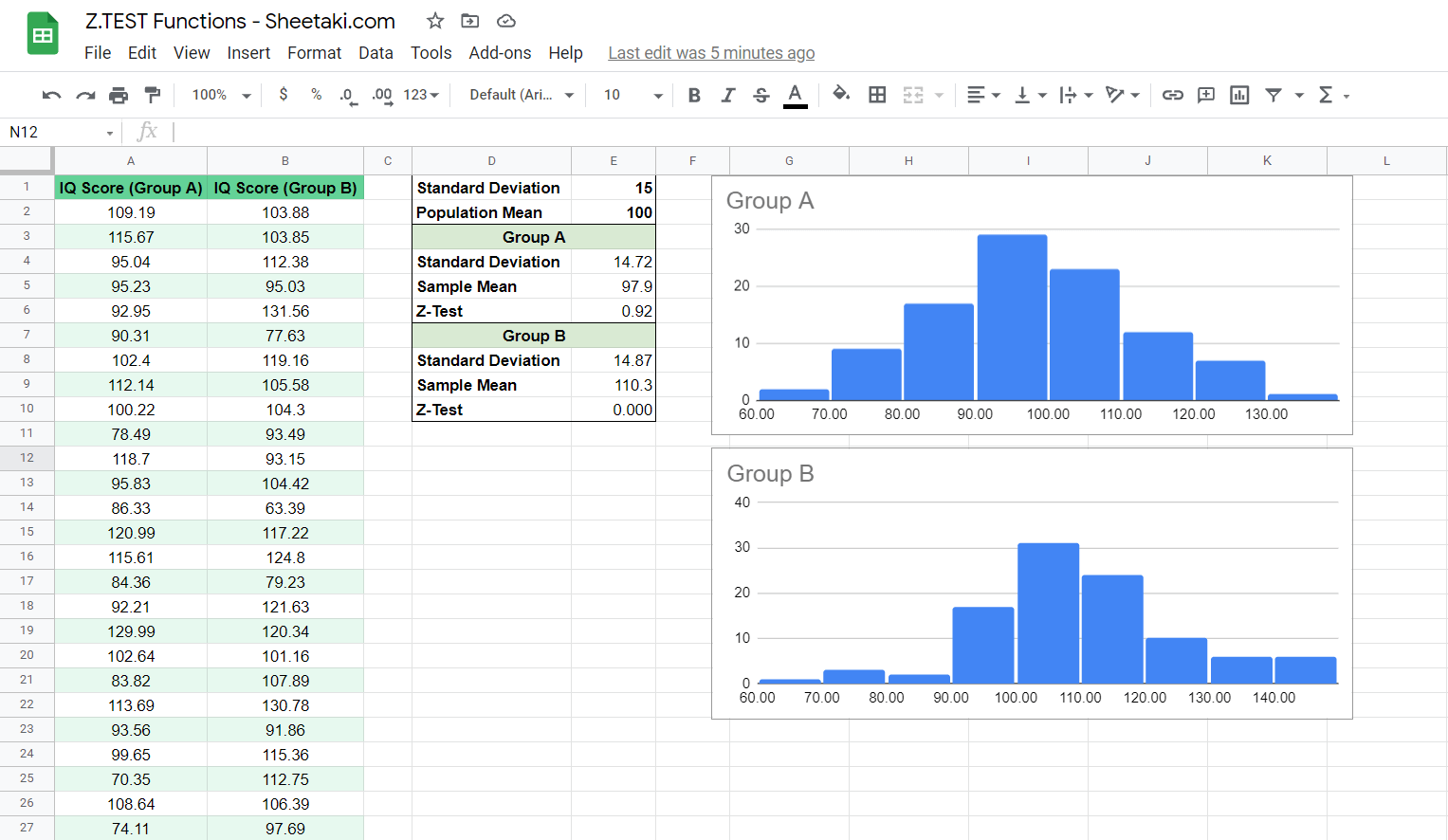 Looking at the histogram on the right, it’s not so apparent if Group B performs better on the IQ test. But using the Z-test function we can see that Group B has a much more significant difference than Group A.

Remember, the lower your p-value is, the more likely it is that your result is not caused by randomness. You can see that the Z-test result for Group B is less than our alpha value of 0.05, which is a good sign that our variable (having a library at home) affects IQ.

You may make a copy of the spreadsheet using the link I have attached below.

We should note that a Z-test works best when the dataset follows a normal distribution. Generally, the Z-Test is most useful when the standard deviation is already known.

How to Use Z.TEST Function in Google Sheets

That’s pretty much all you need to know about the Z.TEST function. Hopefully, this step-by-step guide has made it easy for you to figure out how to validate your hypotheses given a sample dataset.

You can now use the Z.TEST functions in Google Sheets together with the various other Google Sheets formulas available to create more powerful worksheets for your convenience.

Do consider subscribing to our newsletter to be notified of more helpful Google Sheets guides like this one.

How to Use CONCATENATE Function in Google Sheets

How to Find Quartiles in Google Sheets

Read More
GGoogle Sheets
The POISSON.DIST function in Google Sheets is useful when you want to return the value of the Poisson…

Read More
GGoogle Sheets
Those who deal with tables in Excel frequently are no stranger to inserting diagonal lines within a cell.…