How to Use Wildcard Characters in Google Sheets Functions

There are three wildcard characters you can use with certain Google Sheets functions. Those are ‘?’ (question mark), ‘*’ (asterisk), and ‘~’ (tilde).

And now you need to know how many of each mobile phone you have. For this, we can use the SUM or SUMIF function.

When writing the SUMIF function, you will have to enter the criterion (the pattern or test to apply to the range). Each cell in the range will then be checked against the criterion for equality (or match, if you used wildcards when entering the criterion).

So how do we do that?

Let’s take a look at the real example where we will show you how to use wildcard characters in Google Sheets functions.

Let’s first take a look at how many Samsung Galaxy S7 mobile phones we have. We will use the following formula =SUMIF(C2:C9,”S7″,E2:E9), where SUMIF() is our formula, C2:C9 is the range which is tested against the criterion, “S7” is the criterion, and E2:29 is the range to be summed. There are 34 Samsung Galaxy S7 mobile phones in the store and in the warehouse. 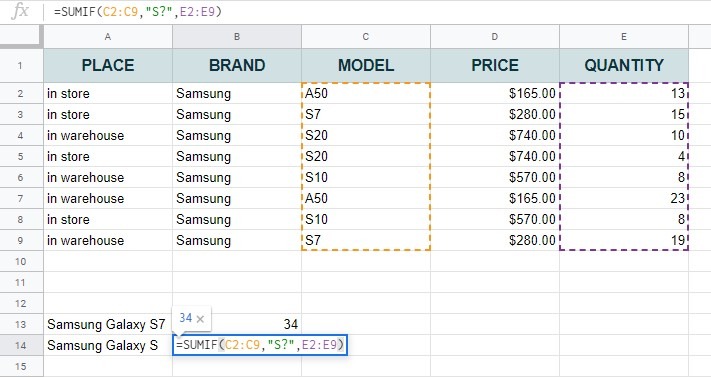 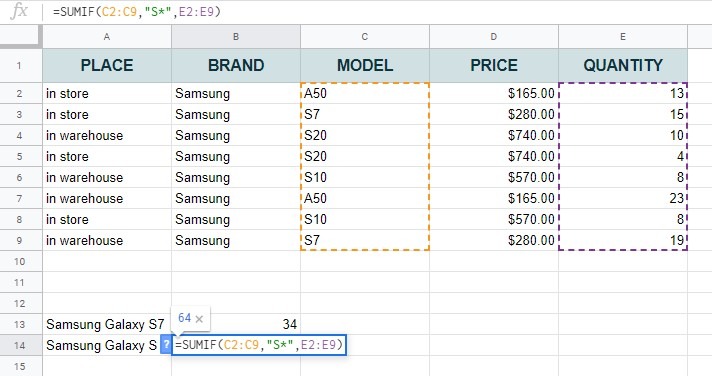 How to Use Wildcard Characters in Google Sheets Functions

Now we will show you how to use wildcard characters in Google Sheets, step-by-step. 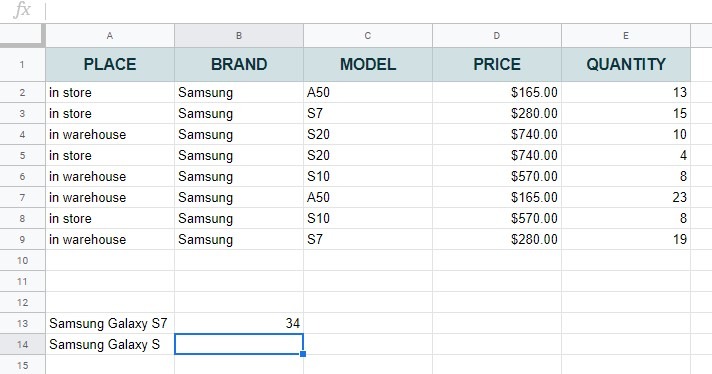 Let’s now see what will happen if we use the question mark (‘?’). The formula will now look like this =SUMIF(C2:C9,”S?”,E2:E9) and will return the number of mobile phone models that have one character after the letter ‘S’ (in our example it is only S7). The result will be 34.

But what if we had some unlabeled boxes in the store and in the warehouse and need to know how many unlabeled boxes (S? in our spreadsheet) there are? If we write our formula like =SUMIF(C2:C9,”S?”,E2:E9) it will look for all of the mobile phone models that have one character after the letter ‘S’ (which are not only S? but S7, as well). The result will now be 70.

But this is not what we wanted. We need only the number of unlabeled boxes. So, how do we that? Simple. We will use our third wildcard character, tilde ‘~’. The formula will be =SUMIF(C2:C9,”S~?”,E2:E9) where tilde tell the formula that the question mark is an actual character and not a wildcard. The result will now be 36.

That’s it! Now you know how to use wildcard characters in Google Sheets functions!

You can make a copy of the spreadsheet using the link below and practice some more:

Make a copy of example spreadsheet.

Or use wildcard characters with other Google Sheets formulas to sort and filter your data more effectively! 🙂

How to Use IF within the FILTER Function in Google Sheets

How to Use PRODUCT Function in Google Sheets